How to Adjust a Bike Cassette | Bicycle Repair 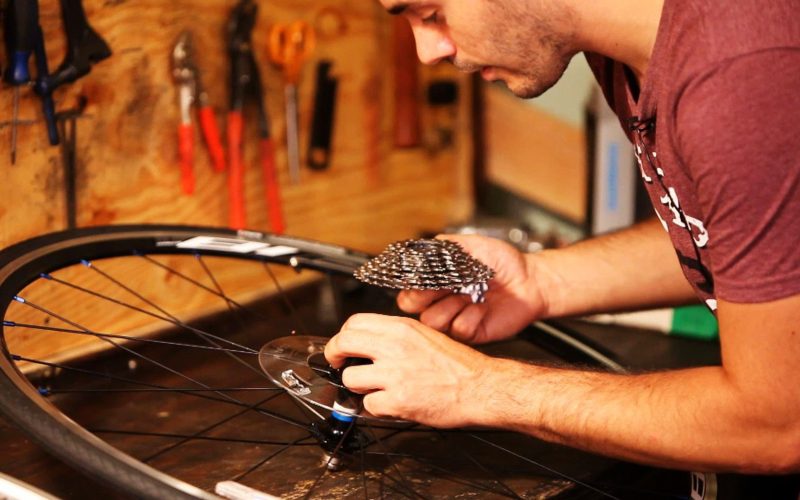 Now, if you have the other kind, which is the more modern kind, it’s called a cassette. As you can see, the two differences, this one just has threads, this one has an actual body to it. The advantage to this is, basically, that you can put bearings further out on the gears. It doesn’t wobble as much, also it’s a little bit sturdier, also a little lighter. So, this is a cassette body.

For a cassette body, you need a cassette. A cassette is splined gears that fit on a certain way. There’s two different types, there’s Shimano, spline and then there’s campanula spline. There are two different types so you have to make sure you have the right compatibility. Also, you want to make sure the compatibility is correct on how many gears you have. You don’t want to put a 8-speed cassette when you’re supposed to have a 9-speed on the wheel, if that’s the derailleur that you have.

Start off finding where the spline fits properly. There’s, basically, one little piece of the spline that’s skinnier than the rest. That fits on first, so, that goes on. Sometimes you need a spacer in the back, you’ll be able to tell once you put it on. Put that on, make sure you’re using the spacers properly, that you have it all on correctly, and that the cogs aren’t flipped. You should be able to read whatever is on it, like this just has the amount of teeth that are on it.

Once you have it all placed on, the way that it stays on the actual cassette body is, it uses a lock ring. Most lock rings are pretty similar. This one has a Shimano spline, so it uses a Shimano tool. The other one has a campanula, campanula tool. Place it on, make sure that it’s going to go on nice and straight so the threads aren’t going to strip. Place your tool on and you can spin it down with your hand. Most stuff that you thread on, on a bicycle, you want to make sure you’re doing it by hand first and not putting a tool on it, or you could strip things.

As you can hear, once I get to a certain area, it has a lot of teeth on it. That’s where it’s actually going to lock into place. You can put it on with a hand, then, use a wrench. Sometimes you want to use a torque wrench if it’s higher end equipment. You always want to go according to the manufacturer’s specifications because every manufacturer is a little bit different with their specifications.

To take off a cassette, it’s a little different and a little harder than a free wheel. What you’re going to want to use is your cassette tool, whichever one works with the spline that you have. Then you’re going to want to use a chain whip. There’s a couple different kinds, there’s ones that are made for single speed chains, multi-speed chains, things like that. This is a 332nd, made for multi-speed.

You want to place it, usually, on a larger cog. Basically, you’re going to place it so it’s pulling the cassette around, making it lock into place where those teeth are inside that lock into place and make that ratcheting sound. Once it’s locked into place, it means your cassette can’t go backwards. You can release your lock ring by going “lefty Lucy”. There you go.